In Between Thom Yorke and Justin Timberlake

February 25th was the release date for Amok, the debut album from Atoms for Peace. This group is rooted with front man Thom Yorke’s first solo album—a departure from the immensely well-reputed Radiohead that he also fronts. So in many respects, it’s actually a follow up album to Eraser (2006). But now it’s collaborative, including Flea of the famous Red Hot Chili Peppers, and Nigel Godrich in to the creative process. The band also boasts REM drummer Joey Waronker and Brazilian percussionst Mauro Refosco.[1]

On March 15th, Justin Timberlake released his third studio album entitled 20/20 Experience. This has been long awaited by fans since wrapping up a world tour in 2007 in support of his prior release Future/Sex/LoveSounds (2006). Focusing his creative pursuits on acting during this time, Timberlake positioned himself as a significant entrepreneur as well, purchasing a major stake in MySpace[2], as well as becoming CEO of a new label, Tennman Records[3].

So I’ll just start with a few comments about the tracks, since my concept of an album review is to discuss everything but their album, I’ll start with something direct.

An electronic album released on XL, a known rave and electro label. It is impossible to place the category of this music; I would only say it is a composite of contemporary House Music and Radiohead. I say that because I believe Radiohead influences Thom Yorke just as much as he drives the band as primary songwriter.

“Default” takes a moment to warm up, it begins with what sounds like VCF staccato notes playing a short sequence and builds entirely on synth tracks. When Thom’s voice lays down that first line with extended reverb—that’s the trick that Godrich must have some kind of patent on—and the chorus comes in establishing a melody before Thom’s “I Laugh Now” hooks you, indicating he’s going for the dance track on this one. I find it quite groovy with great texture.

“Judge Jury and Executioner” is one of those get-stuck-in-your-head tunes. Maybe it even gets under your skin because it makes you think. The acoustic guitar blends in beautifully with Thom’s haunting vocal backing tracks.

“Reverse Running” follows and it’s really indicative of this album: disjointed, jangly, catchy beats at mid-tempo, strong melodic structure, deep bass, electric guitar hooks, and intense synth sounds. In fact, the tune ends with buzzing rapid-fire synth sounds cross fading in to the final track of the record. It’s amazing what Thom and company gets away with, because it sounds good.

A neo-soul, funk, post-pop album, with classic influences going back to Motown and Beach Boys, produced using contemporary hip-hop methods while sounding a lot like the great early eighties records by Michael Jackson and Prince. Most notable are the string arrangements that take the listener back to the era of Sinatra—which is the public image Timberlake has created to support this record.

“Don’t Hold the Wall” comes in slow with a smooth vocal intro and then the percussion comes in like a slow gamelan but with middle-eastern electronic instruments. When Timberlake spits lyrics rapidly and the chorus comes in, it’s clearly an up-tempo tune like maybe 140 BPM. Structurally, it’s compelling and holds your attention. Then, abruptly it goes the direction of House music, the snare drops, that deep bass gets in to the heart of it and grooves out like that.

“Let the Groove Get In” is driven be this African shuffle with rattling percussion and heavy electronic bass hits, but there is no snare hit until the very end, nor instantly recognizable dance-pop or hip-hop beats. Funky electric guitars and soft vocal harmonies give it that Michael Jackson sound. This might be the flagship track because it comes in late in the record, carrying all the momentum forward a notch. Unfortunately, “Mirrors” follows this track.

“Mirrors” is pure fan fare. N’Sync fan fare even! This would have been a very safe track to start JT’s solo career with nearly ten years ago, but it sounds out of place on this album. It does nothing for me. I’ll go so far as to say, it stands in the way of this record going down as a classic. I bet there are a lot of fans that would disagree.

These two albums have been my jam, decidedly so because I knew that I wanted to write a review about Amok after—as usual—I became totally absorbed with it. I respect Thom Yorke as a truly creative songwriter and I believe he is already with the likes of boundary pushing pop legends like David Byrne, and even John Lennon. But it was a coincidence that Justin Timberlake recaptured public sensation as a musical performer and songwriter and so captured my interest simultaneously. Then I started thinking about their parallels.

Justin Timberlake recently hosted Saturday Night Live and it was one of the strongest programs I have seen. 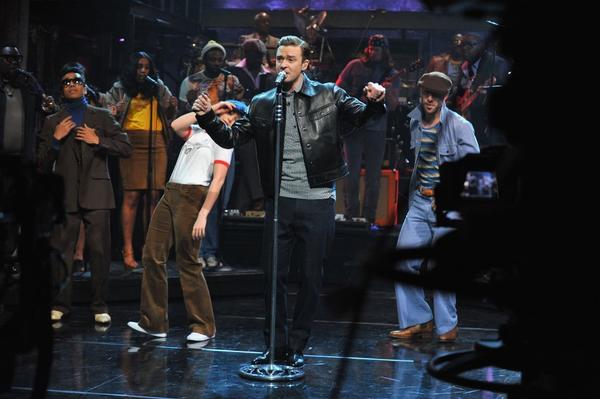 An all-star cameo cast including the “five-timers club” supported him throughout the show. I want to point out Candice Bergen’s toilet seat joke during the “five-timers” sketch. You can watch it on Hulu.[7]  A male-dominated elite club and that’s the only joke the best comedy writers in the world could come up with? Something stinks if you ask me. But I digress.

So here is where I got to see Justin Timberlake in his glory, as an entertainer of the highest sort. Host and musical guest of Saturday Night Live, he pulled off both acts and kept it lively. His new songs sounded strong. Then, a few nights later, I’m in my neighborhood bar and my man Grant is bartending. He’s rocking the Timberlake album. It actually sounds compelling and somehow fitting in the dive bar. So I decide to rip it from Pirate Bay. For that matter, I ripped Amok from Pirate Bay also.

If you aren’t judging me for using Pirate Bay, then you can move to the next paragraph. Now listen, I do a lot to support the music community. You would be wise to suspend judgment. I don’t use Spotify. Do you realize how polluting Spotify is to music? Yes the same folks who argue about musicians getting fair payment use this service and host their music there. Nope, I only discover new music from SoundCloud, Free Music Archive, and through friends. I see at least fifty undiscovered bands a year. I pay door fees. My friends usually give me their music. So shut up and rip someone’s record from time to time; they are expecting it.

I have to hand it to JT for his tremendous work on 20/20 Experience. The composite of what Timberlake offers as an entertainer is putting him in the category of greats like Sammy Davis Jr. and Fred Astaire: singer, dancer, actor. As for his new album, the rhythm, melody, and sonic quality are just about perfectly calculated. Most tunes clock in after 7 minutes too, demonstrating a new method for pop and dance songwriting. You don’t notice the length of these songs because the structure is smooth, smart, and it’s like the remix is programmed with the originals.

We are no longer in the 3-minute pop song era. The main reason for that was technology: singles were released on vinyl discs with cut grooves that played 45 rpm on a phonograph while radio was the primary means of transmission. The inertia of this technical limitation was so strong that it carried over through the nineties. But now, JT’s album makes it very clear we’ve moved on.

But 20/20 Experience does not break new ground. This pop-song-length trend was pretty well pushed forward with Radiohead’s hit single “Paranoid Android” in 1997, back when Timberlake was just getting off the ground with N’Sync. Even Radiohead’s 2011 release, King of Limbs quickly followed up with a string of remixes. And the songs on 20/20 aren’t particularly fresh sounding. Sounds like it was produced in Logic from sessions left behind by Michael Jackson and Prince.

For that matter, Amok isn’t treading any new ground either. It sounds like Thom Yorke’s Eraser album (2006) but tightened up per the effort of touring that album off and on for five years, arriving at a solid band. Hence naming the band after a single from said album. It sounds like it was produced in Reason with some live bass, vocal, and guitar tracks in Ableton Live. The bass is pushing a bit too hard and doesn’t have the sonic balance that I’ve come to expect from Producer, Nigel Godrich. But it sounds strong, rich, and psychedelic–as I have come to expect.

While Justin Timberlake had to impress me numerous times to gain my appreciation, if any member of Radiohead does anything, I want to know about it. If Thom Yorke photographed his dick in a box and put it on an art tour, I’d want to see it.

It’s worth noting that another album is due in November.[8] This seems to be presented as “Volume Two” rather than separate albums that just happened to be recorded at the same time—like the way Radiohead put out Kid A and Amnesiac within less than a year of one another. But my guess will be that he times the world tour to support the second release.

I must analyze the voice of TY and JT. Thom is no longer capable of hitting the notes he could in the nineties. It shows in the new music. Put it this way, I am qualified to sing anything he has done since In Rainbows. JT isn’t a dynamic singer, he’s got a Billy Holiday kind of range though, and largely in the way that he uses it. He doesn’t take vocal risks the way Thom always has. And Justin’s voice is sparsely auto-tuned and when it is used, it’s quite tasteful, because Justin is a real singer. Thom Yorke has something of an awful voice and it would be ruined with auto-tuning. You shouldn’t like his voice; you can only love it. Justin however has a very likeable voice. Add to the balance his good looks and performance ethic and you’ve got a star. A guy like Thom Yorke beats the odds only because of his appeal as a creative person. Add to the balance his compelling/awkward appearance and punk rock attitude, you’ve got a rock legend.

My conclusion is this: two great records that will make 2013 an historic year from two of the most talented living recording artists and performers with us today. Worth a rip.

Co-Founder of THRU Media. A background in non-profit, music, and radio preceded my ambitions here. Now, I aspire to produce new media and publish independent journalism at this site and beyond.

There are no comments

Have anything to say? Cancel reply

This site uses Akismet to reduce spam. Learn how your comment data is processed.

Brief History of a Magazine Reflected in “Salon”

When I Was Wild and Other Poems

200-Year Life Cycle of a Democracy

Where is Abdel Basset Sarout?

Homs, The Syrian Revolution, and the Icon